Chiropractic Adjustment Without “Twisting or Popping”​

Imagine if thirty to forty years ago, we told you that doctors would watch television to perform surgeries, that brain surgery could be done with a laser, that fetuses could be operated on within the uterus, that knife-less surgery could be performed – you would not have believed us.

By the same token, would you believe us if we told you that Chiropractic treatments and reorientation of the nervous system, could be done comfortably while you were sitting in an upright position without any turning or sudden movements? Would you believe that newborns, as well as the elderly with osteoporosis, can be treated safely and gently? ProAdjuster chiropractic is the answer for those who need accommodation based on age, injury, or sensitivity.

Humans are consistently asking their bodies to perform at higher levels. Now with ProAdjuster chiropractic we can match the demand placed on the spine, joints, tissues and the nervous system. We have the ability to fine tune our own energy and enhance every aspect of our lives! 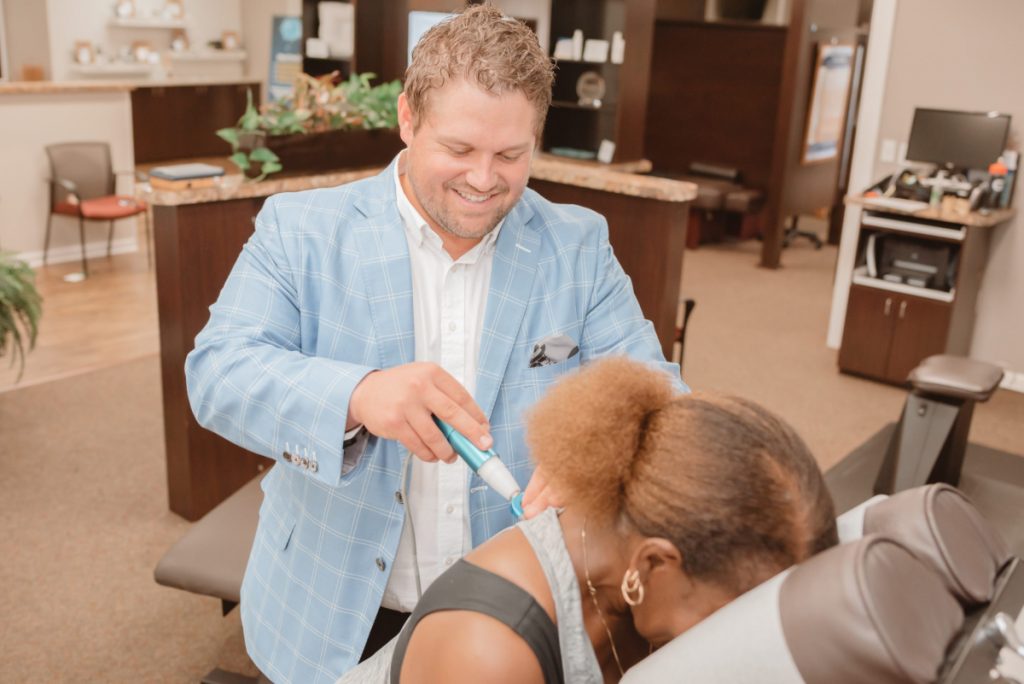 Traditional chiropractic is still a safe and fundamentally used method in our office. However, we understand there are those who aren’t able or are afraid of traditional adjustments. The elderly, those with low mobility, post surgical patients, and those who are concerned about the manual adjustment can still receive the care they need. The ProAdjuster facilitates the same clinical result without rotation and bodily movement. If you are struggling with pain, discomfort, just had surgery or would like to be preventative in your healthcare; the ProAdjuster is another option for ensuring spinal mobility and health.

How does the ProAdjuster work? 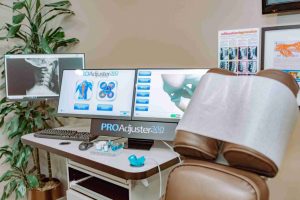 ProAdjuster chiropractic uses a light force introduced into the vertebra to check motion and it is reflected back to the piezoelectric sensor, which measures the reflective force, sending it to the computer for interpretation all before the muscle can respond in its normal way. Isn’t that incredible?

If you have ever “flinched” at something, you know exactly what is meant by this. The piezoelectric sensor in the ProAdjuster chiropractic instrument responds and registers information faster than your body’s ability to react. Therefore, a precise and accurate picture of the extent of rigidity or fluidity of each vertebra is reflected.

First, our doctors will engage in a one-on-one conversation with you to determine your medical history and the possible causes of your problem. The adjustment and treatment procedures can then be customized to fit each patient’s needs.

The next step in evaluation and treatment is to utilize the ProAdjuster chiropractic computerized analysis to pinpoint the problem areas. The information is then charted graphically on a computer monitor, so your doctor can detect the problem areas on each and every visit.

Your chiropractor will now begin treatment with the ProAdjuster. By applying the ProAdjuster’s resonant force impulses precisely to the affected areas, you will receive gentle, effective treatment to that specific area, thereby reducing the subluxation. This will relieve the pressure on the nerve, allow the nerve to heal and restore the nerve’s ability to transmit signals to and from the brain more freely. Most importantly, it will help relieve the pain! In addition, your doctor may take the readings again after the adjustment with the ProAdjuster to compare the results. That’s putting analysis on a whole new level!

At Carolina Chiropractic Plus, we are dedicated to offering our patients the best treatments available by using the highest grade cutting edge technology at our state-of-the-art facility. In addition to traditional chiropractic care, our office provides an integrate approach to health care spanning the entire rehabilitative and wellness spectrum.

You can call us today to make an appointment for your first exam, evaluation, consultation, and treatment with us. We know you will appreciate the comfortable, easy, tranquil environment we have created for you. If you are looking for a chiropractor near Shelby, Carolina Chiropractic Plus is the one for you. Book your appointment today using the forms below.

If you are ready to take the first steps towards finding relief through our cutting edge technology and therapies, then fill out the form below and one of our staff members will be in contact to answer your questions and to schedule a phone or in-person consultation.